I've read that Old Bar Lagoon is really good for beginners. I am just at the stage of learning to get up and it's really tricky in Sydney to do it safely with so many other kiters/beach goers around. Catch 22 - the worse you are, the more you need to practice; but also, the worse you are, the more dangerous it is to practice when conditions are good! Can anyone verify whether this is a good location and if so, whether there are generally better times of day to try it out at this time of year? Much appreciated.

I have the same problem. I think it's the slightly advanced beginners or people who have never taken lessons that are the challenge - they can run out and back, but only on one track and don't seem to realize that a beginner floating just out past the rock jetties needs to be avoided. I've had a couple of people zip by me closely both directions several times who didn't seem to realize I was waiting for them to go away before attempting my launch. I also had to replace a line because instead of watching his kite, some goof was looking at a woman he was trying to impress; showing her how to launch and looking at her instead of where his kite was going.

I drove up to Old Bar last year - the photos I took are in the forums somewhere. If you're going to drive, I'd consider Jervis Bay, which is closer, and from the beach where people kiteboard, you can drift a long way with no rock jetties, and still get blown back to the beach. I was there during the week with a group and it wasn't crowded at all, but enough people around to help launch, etc. When I went to Old Bar, it's back a gravel road and there was no one around except for a few random vehicles coming in and out. Caveat - I was there after a bit of rain, and the flood water was brown, so it wasn't optimal time - but it's a bit off the beaten path. Another option - Woolumboola Lake. I was with a group that visited, but some didn't want to go there because it seemed too shallow. At that time there wasn't enough water to breach the sand bar, but after rains it becomes tidal and should be a good spot. I would love to go back there now to check it out, but by the time you drive out from Nowra, you could also be at Huskisson, which is near where people go on Jervis Bay.

Thank you, this is super helpful. I didn't realise you could kite at Jervis. I will try Old Bar first because I will be going past there on the way up the coast and high tide will work out timing-wise, but those options are great to know. I will report back here about how Old Bar goes!

I was at the beginners beach near Botany Bay the other day and that particular beach was basically empty, other than a few newbies like myself, including some doing lessons. A seemingly pretty experienced kite boarder rode in out of nowhere and flew his kite straight into a guy doing basic body dragging less than 20 metres out. There was almost an entire beach free and that's where he chose to come in. Anyway, the kites got tangled, they managed to free them up in the water, and the experienced surfer rode off with a pretty half-hearted apology, while another person helped the learner retrieve his kite and get it back onto the beach. The learner sat on the beach for a while to recover and all was well. But wow...

To be fair, 99% of kiters in Sydney are super respectful of learners and I am definitely more of a danger to them than they are to me. I just feel a little nervous when people come so close after seeing incidents like that!

Yeah - most people are great, just a few seem clueless. 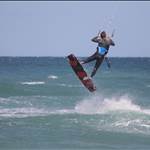 One of the guys at my beach told me that Wallis lake is good to kite surf at. If you do it from the Great Lakes sailing club you have a massive sand bank that is only waist deep I think. It works from nor east, east, and southerlys. A southerly can't have any east in it otherwise it gets to gusty I have heard. 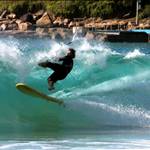 We used to go to chittaway up on the central coast too. Weedy, but shallow and works in a summer NE, and a pretty easy drive from the northern beaches. Worth a look for a good day trip.

Haven't had a look at Mudds (Old Bar) this year (valves gone on my old RPM when I went to pump it up this year) so cant tell you how it is.
We tended to only kite Wallis Lake in winter when the winds from the west, gusty as all hell and the waters freezing (Wallis Lake is bigger than Sydny Harbour and only averages 6 foot deep so wind temp affects it a lot when it snows up on the Barrington) but good to get wet. If the winds got too much south in it it's blocked by the hill around Pacific Palms. NE would get in their but we had Mudds closer to home and there's the risk that if it goes pear shape you end up way down the lake at Whoota about 15-20kms away.
Still the lakes a beautiful place to ride when the waters crystal clear and got a good NW on it

As an update, I went to check out Old Bar but unfortunately the wind was barely sitting at 10 knots. I was there at high tide, and to be fair it was a particularly 'high' high tide so the water was pretty deep, but it wasn't 100% clear to me how logistically you would get yourself back upwind if you launched from the nominated Muddies launching spot (wind was NE). It seemed like the water was too deep to walk back upwind in the water, but if you went back to the shore it was all trees. Maybe a different wind direction would work better?

Anyway, I checked out Jimmy's beach in Hawks Nest on the way back. Unfortunately that day it was 30 knots (so I had the opposite problem!) but that looked like a very promising beginner's spot.