The holiday crowds at Monterey / Botany Bay got me a bit frustrated, so I decided to go up and check out Old Bar over the weekend. Of course it happened to be the weekend of record rain and the Manning River starting to flood. I'm a beginner, and I was alone, so it was more about just checking the place out. As I scoped out what seemed to be a launching point from Mudbishops Point Road, I envisioned my kite ending up on the trees there. Major item of note: bird nesting September to February, which is pretty much Australia's summer. The sign on the fence says little terns; which seems to be an endangered species. The fenced area runs from the south end, northward up the ocean-side sand dune that creates the lagoon. I would imagine that kites might make nesting birds a bit nervous; think large hovering birds of prey. So it would be ironic if the birds survived 4WDs and dogs, but fled due to kites! There is a local birdwatching club that might know more about the birds. There was a bit of dumped garbage in the picnic area at the end of Mudbishops Point Road. Someone dumped a couple of tires at the grassy spot that looks like a potential launching point. At the south end of the lagoon was a peculiarly isolated burned area.

The water was brown due to tannins - I'm not sure if it's always this way or the situation was enhanced by the previous 48 hours of rain. I am convinced there was a nice huge expanse of shallow water, but the murkiness made it difficult to tell. I waded out to my knees, which put me far enough out from the trees that I could probably drift-launch a kite in the wind of that morning, though again, as a beginner, had some concern that in the wind of that day, might end up back in the trees. 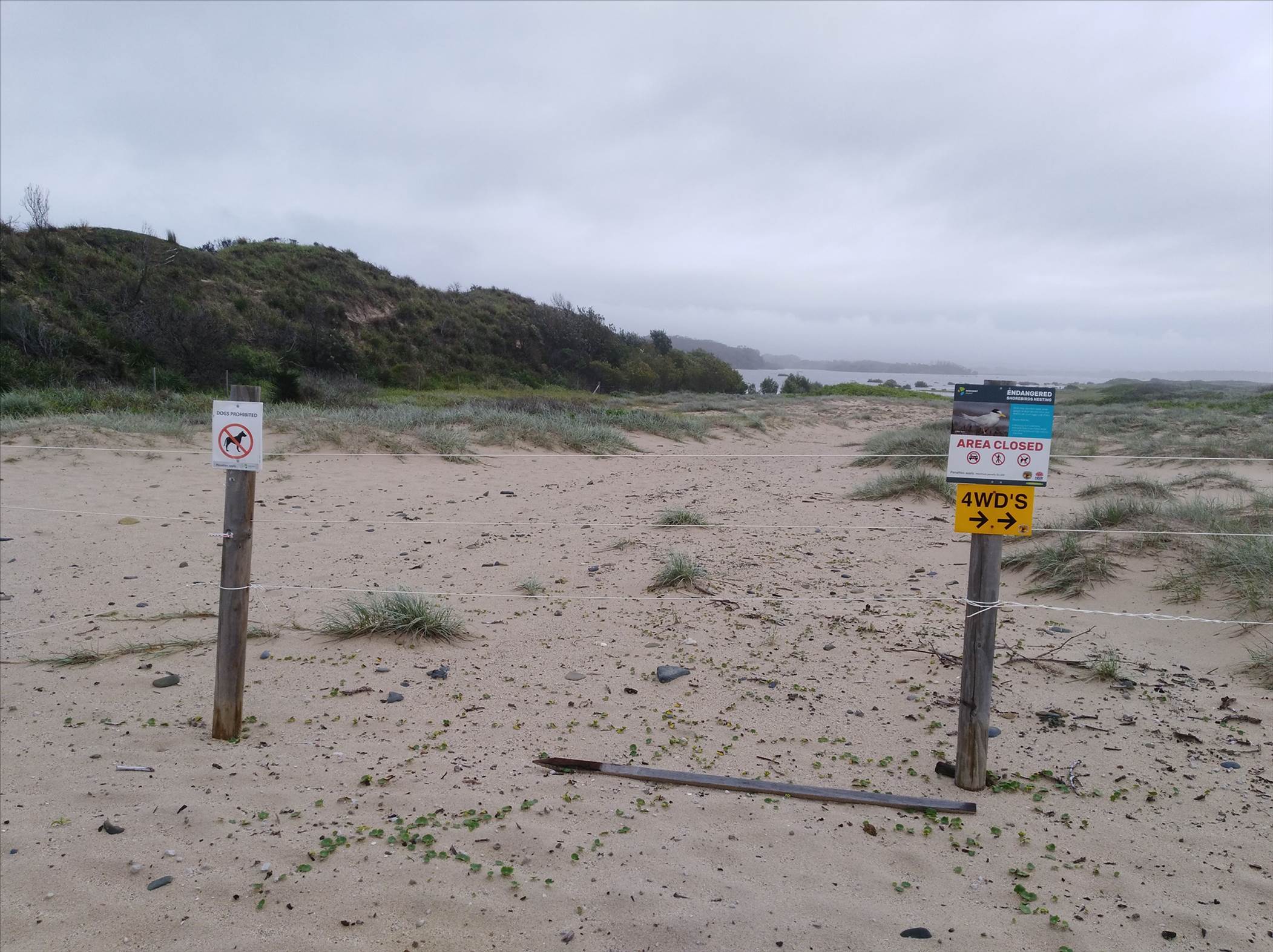 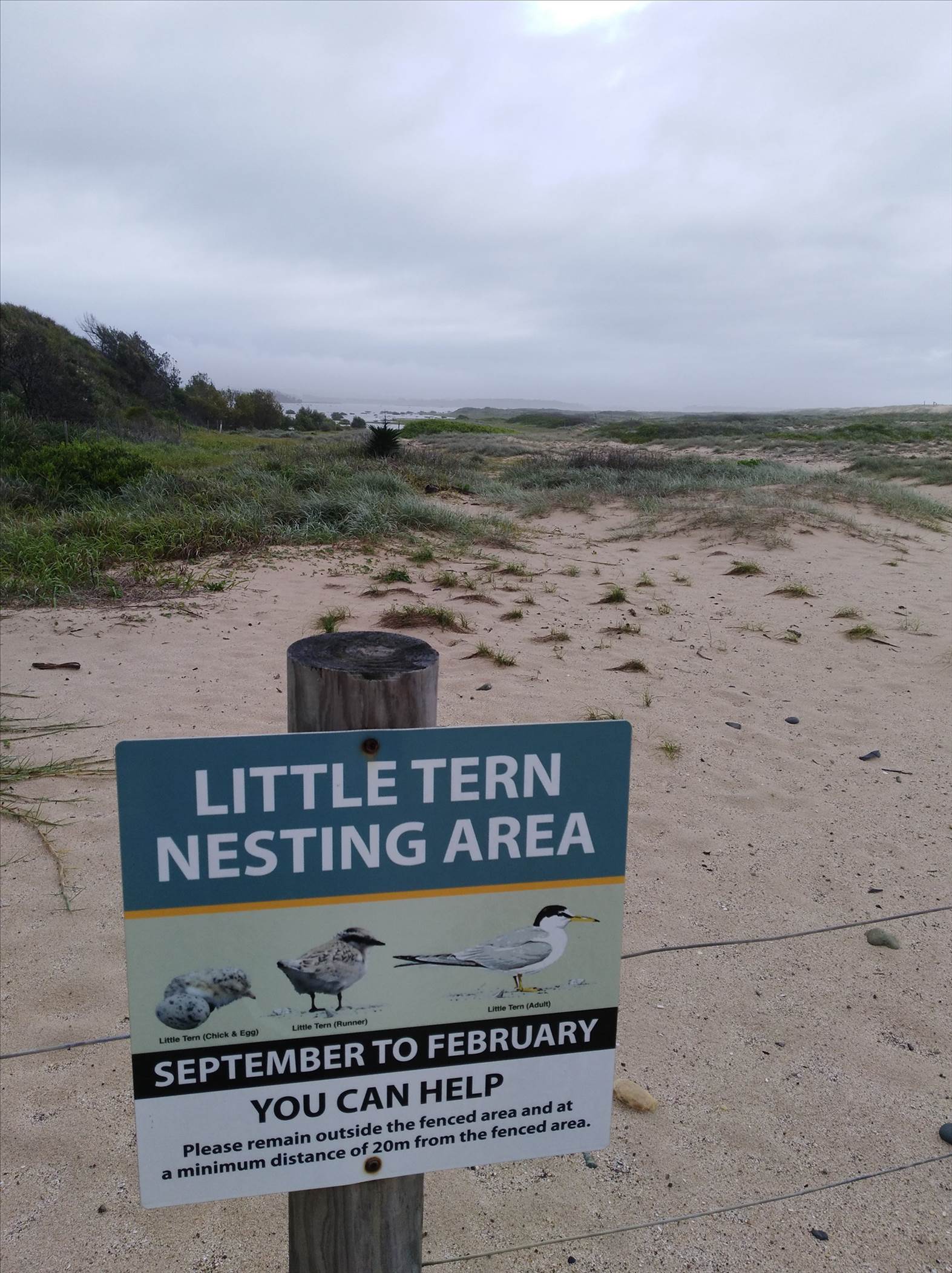 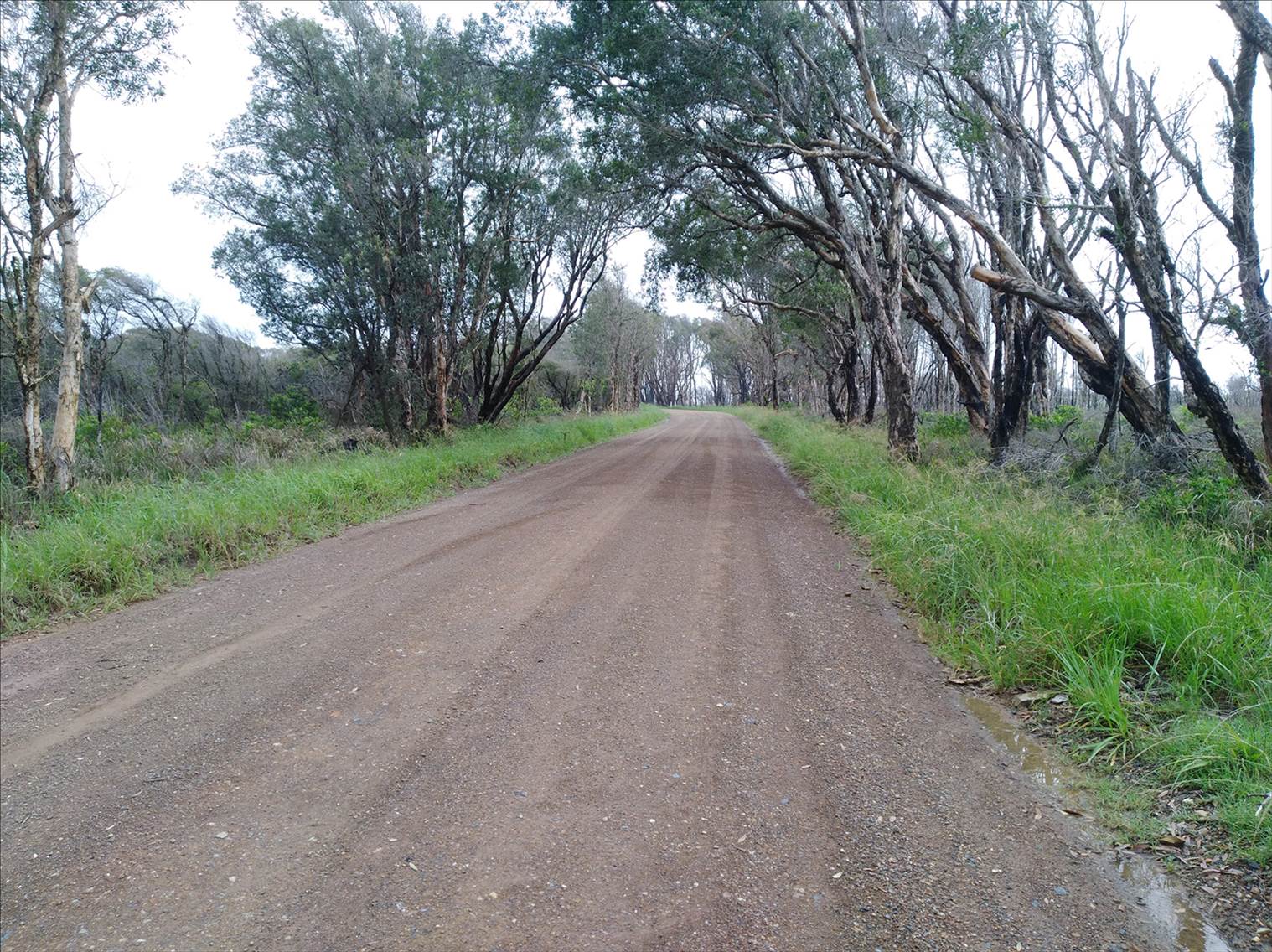 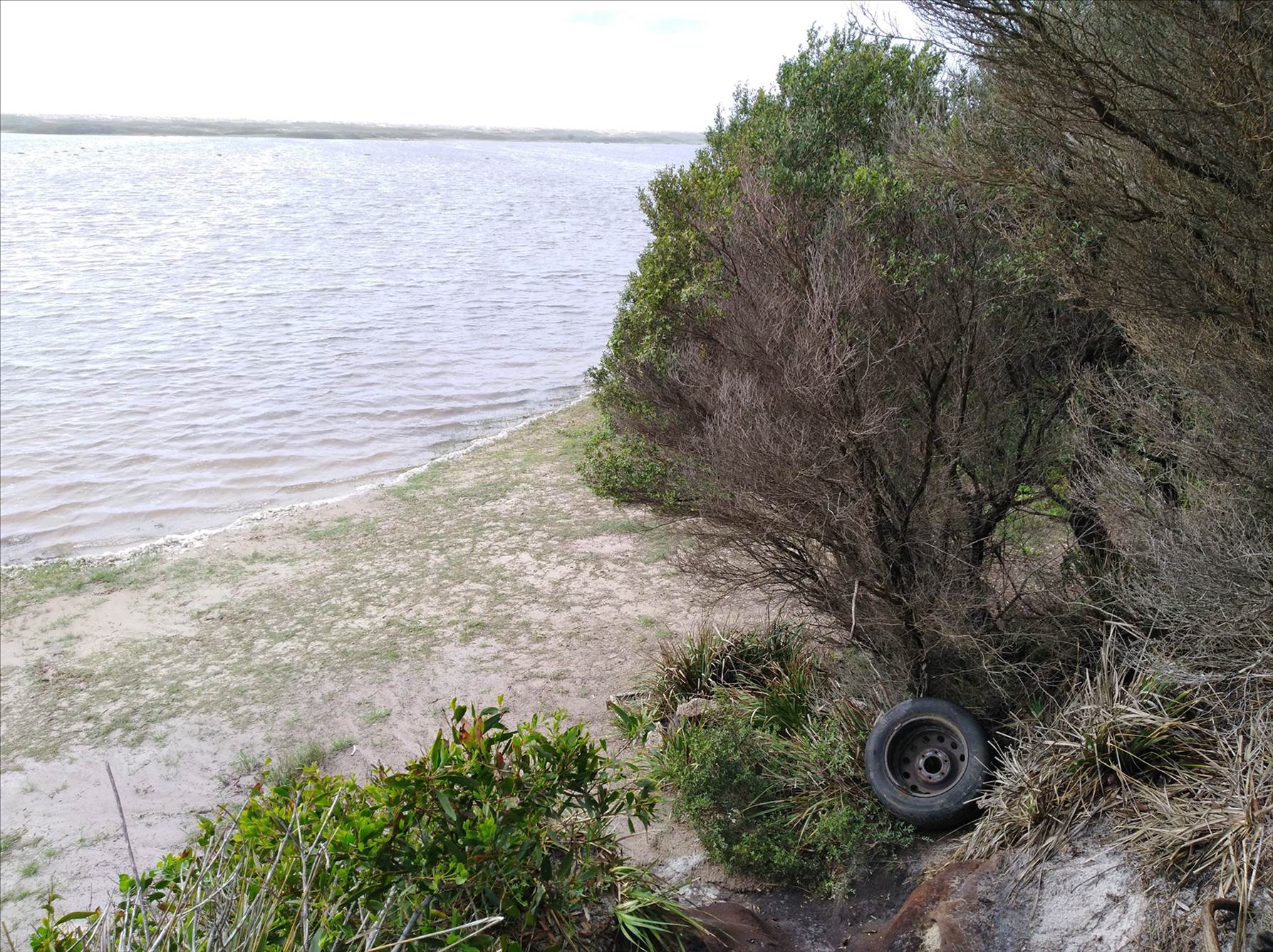 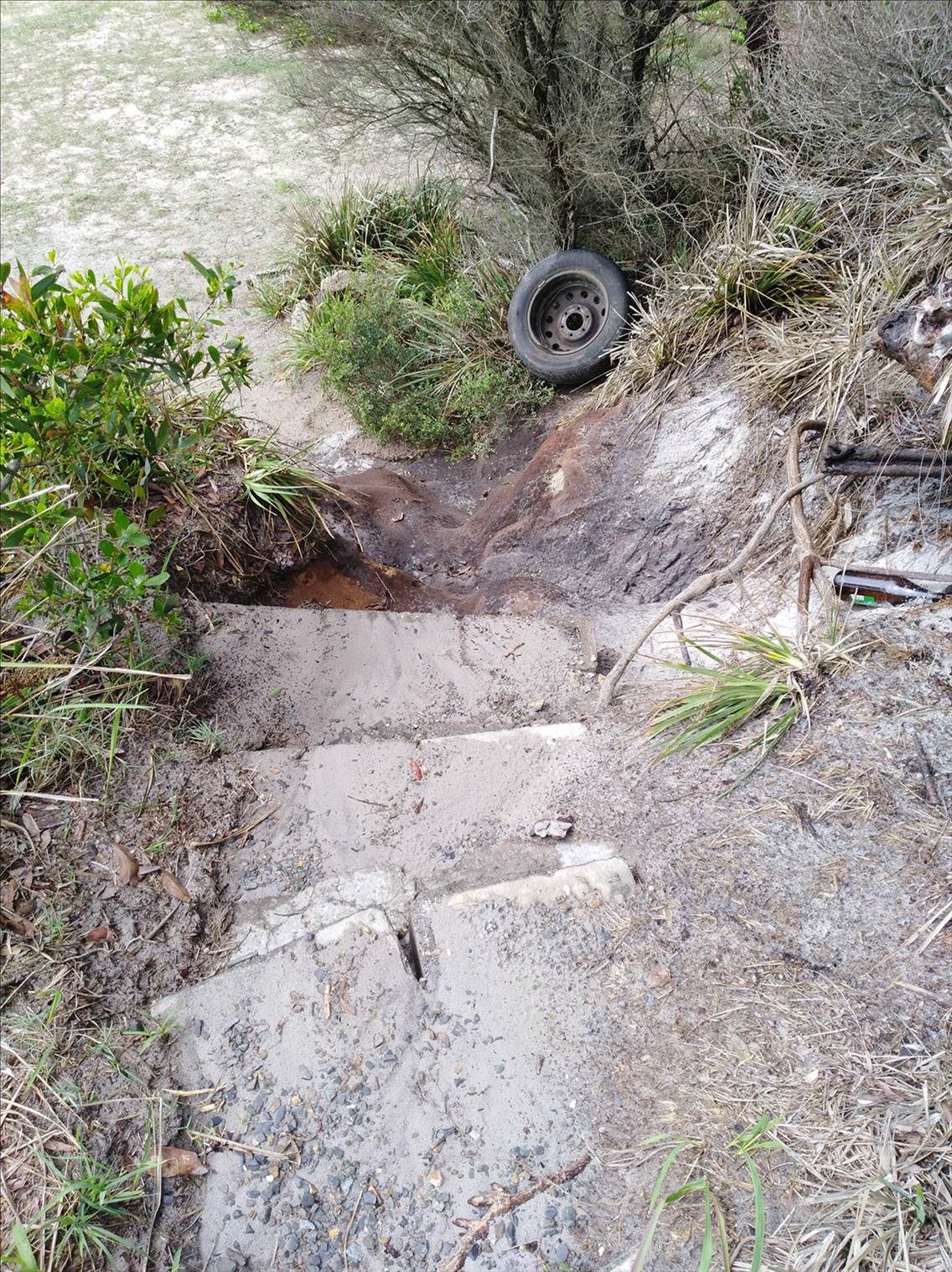 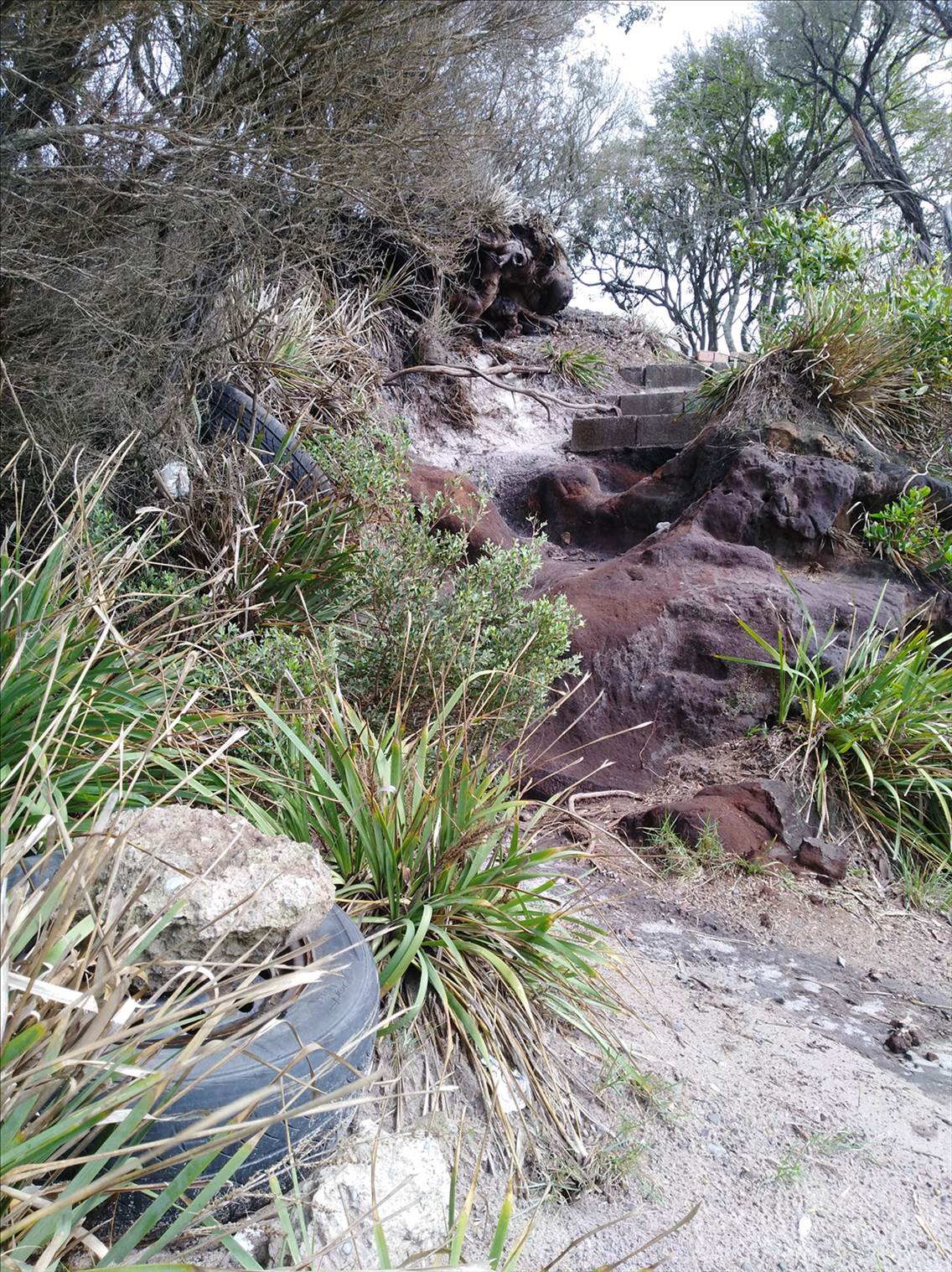 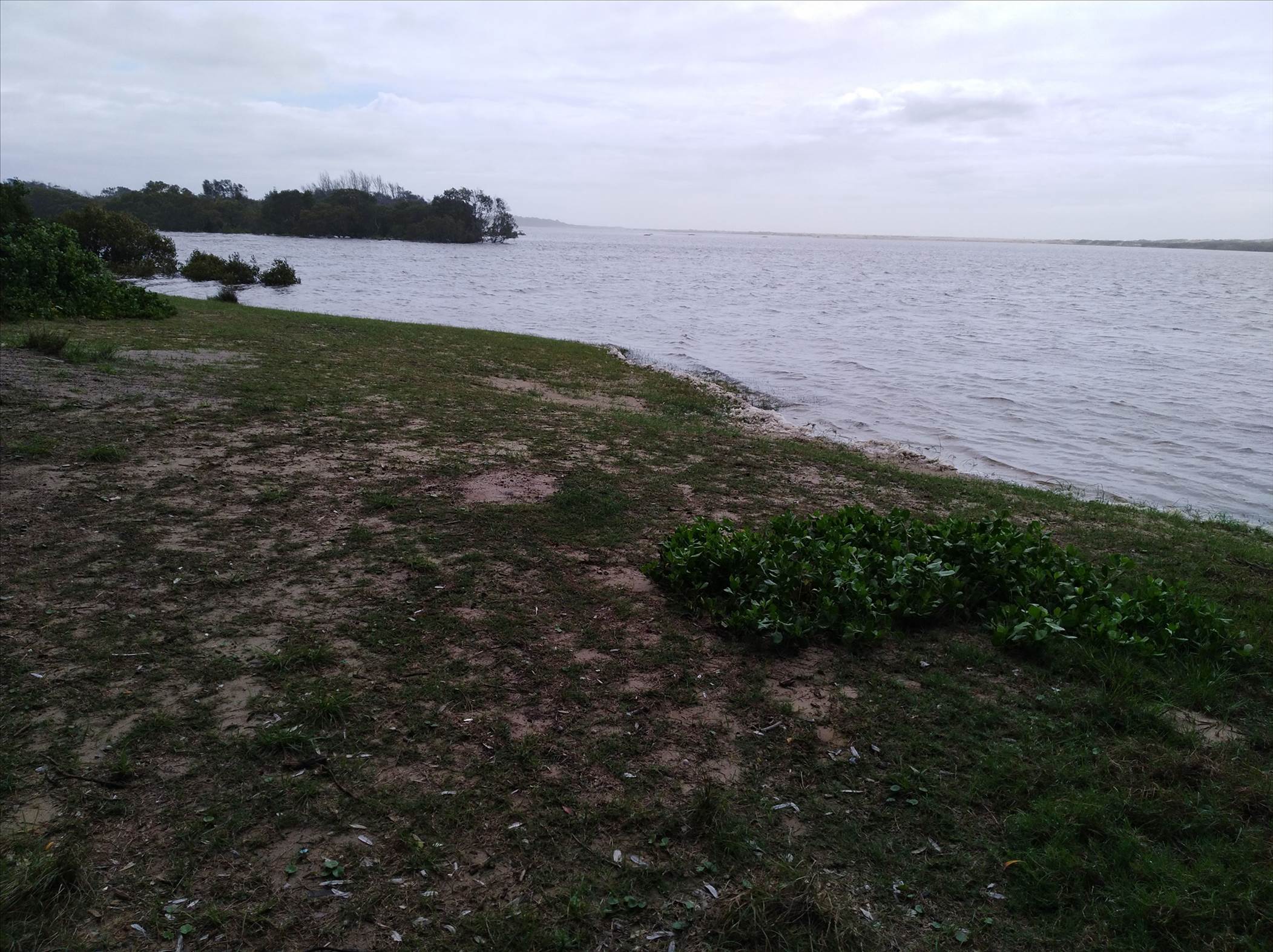 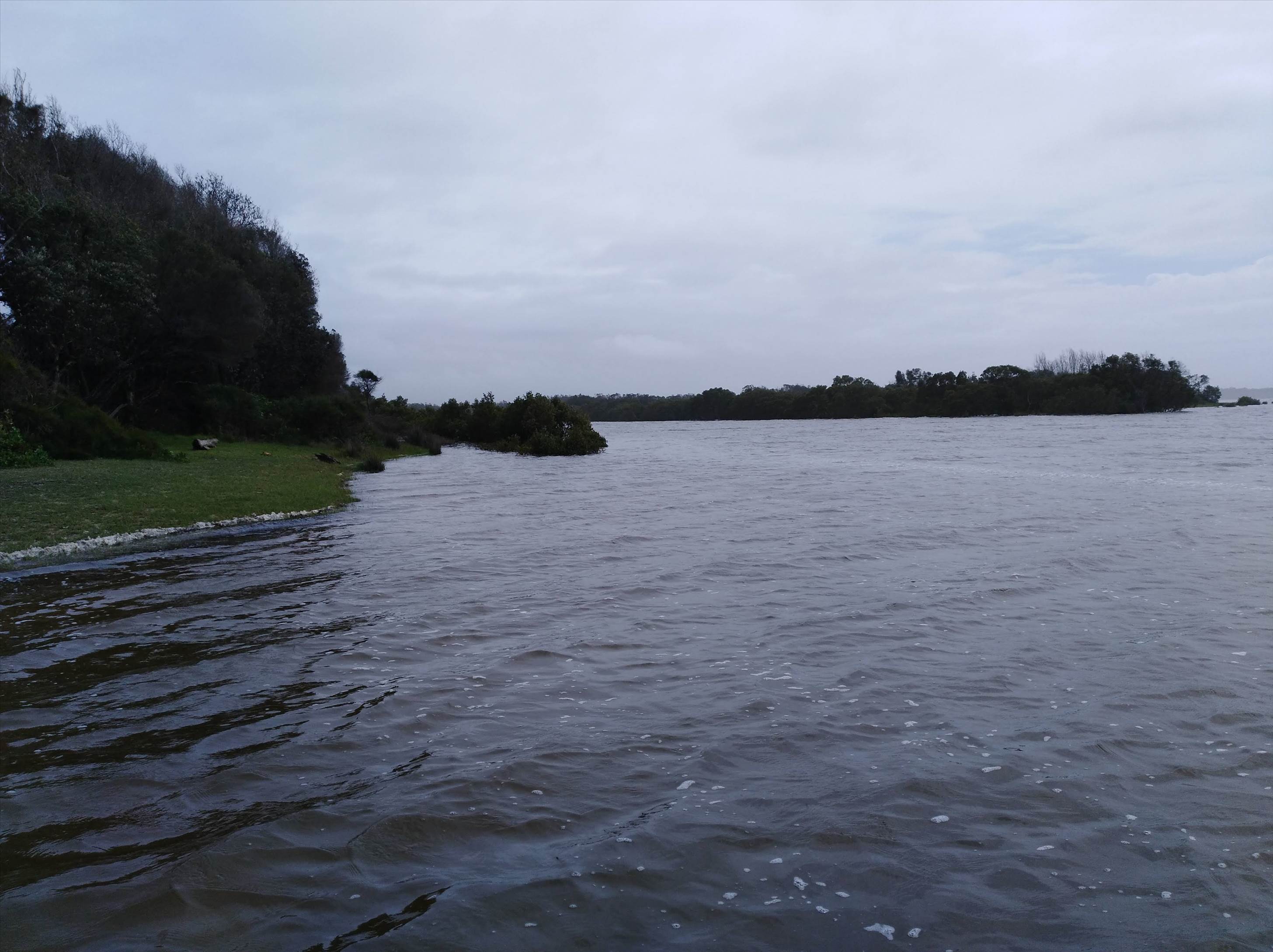 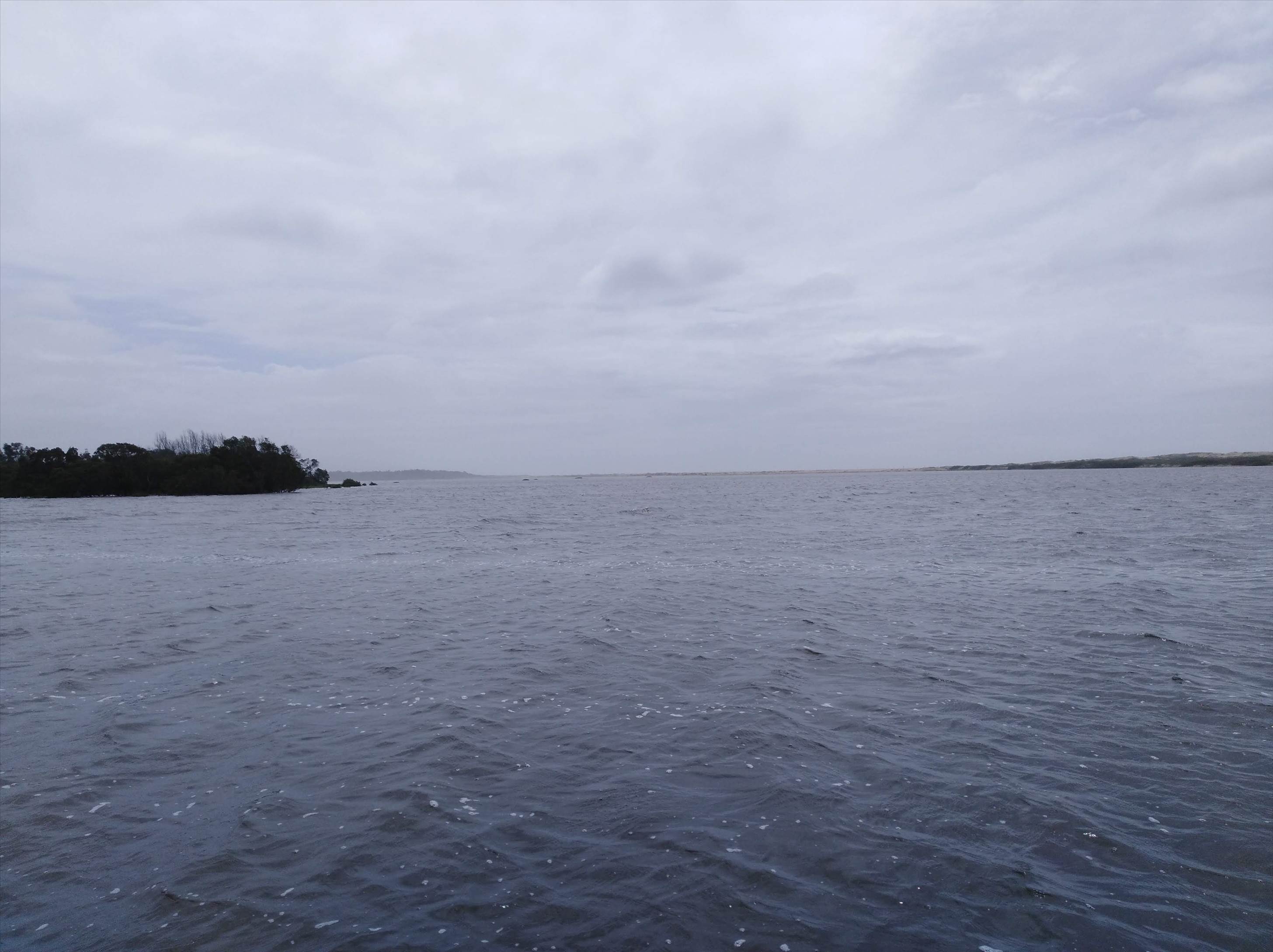 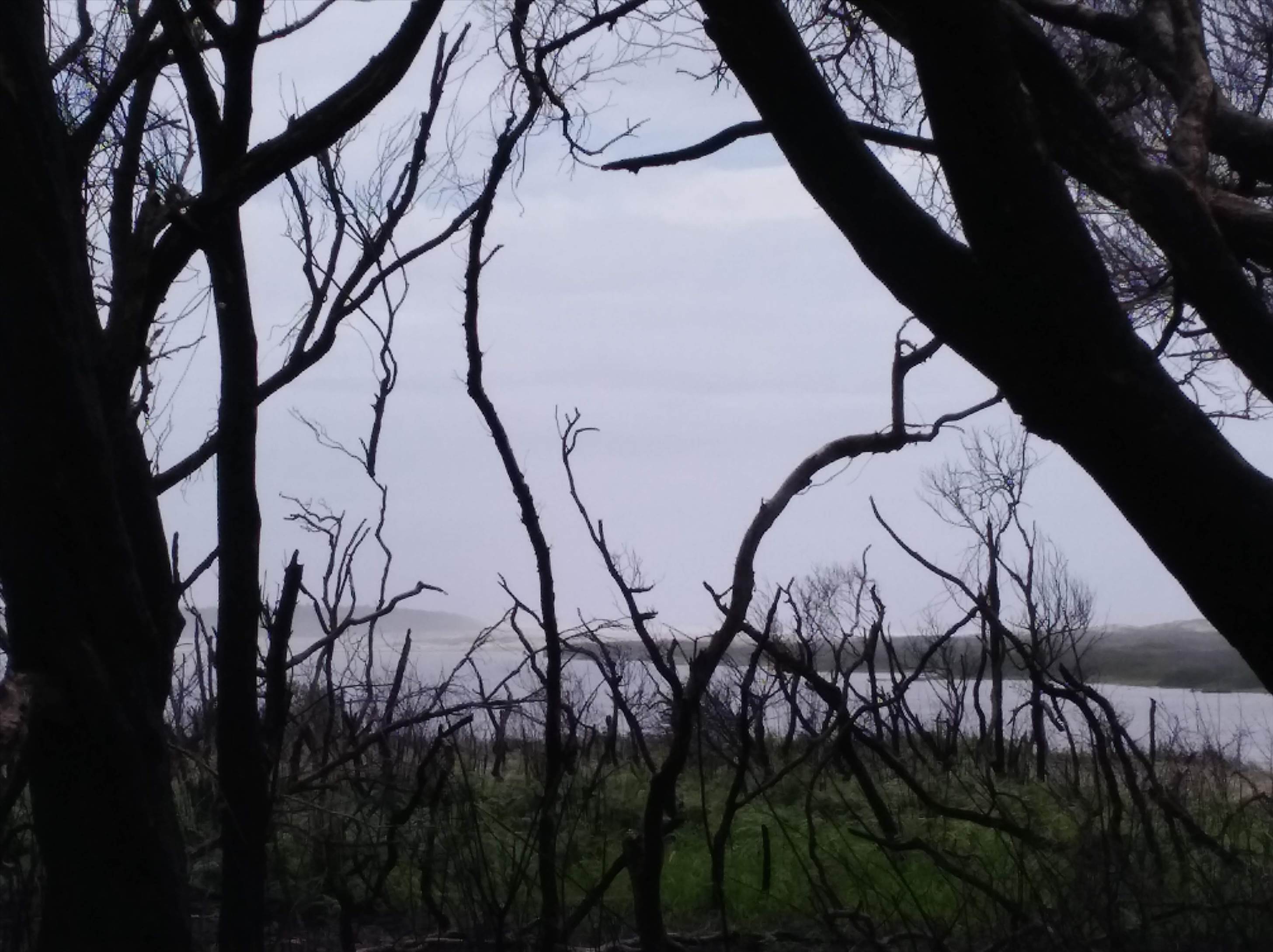 Hi
The location with the dumped tyre's is the kite set up point. (Sad to see as "The kite fairies" spent a lot of time getting that area clean and setting up the launch site)
The water is normally pretty clean however with the rain and flood it would be pretty dirty atm. I haven't ridden Mudd's for a couple of years due to it silting up, also locals tend to ride in the surf at Wallabi Pt.
I would recommend that as a beginner that you set up and launch on the sandbar in the middle. (Hidden by the dirty water) Due to silting it has only been ridable at high tide for the last few years. With the big rains the entrance has been opened so the water should clear up pretty quick just be careful about the terns and don't cross any fenced areas on the dunes.
I'm just waiting till my girls are a bit older and I hope to get them out there to learn on those sand flats. I spent so many days at the spot back in the mid 2000's just waiting for the wind to kick up a couple more knots so I could ride.

Select to expand quote
Booga said..
I would recommend that as a beginner that you set up and launch on the sandbar in the middle. (Hidden by the dirty water) Due to silting it has only been ridable at high tide for the last few years.

Thanks for advice! Yeah - the pictures don't really do it justice in terms of the expanse of water. I could see there was a shallower spot out there that would be good to wade to and launch from - good to hear that it's not usually this brown! I'm down in Sydney and the harbour and Botany Bay have been brown instead of their usual clear, and lots of debris. Great to hear some local advice, and I'm hoping to get back up that way again!

Oh - I should add - the grassy launch spot wasn't really that bad - just a couple of old tires and a bottle or two; thankfully no broken glass.