It’s all about the sliders at this years Triple S, but it kind of always was…

Traditionally the Triple S competition in Cape Hatteras, North Carolina was named after the three disciplines involved, Surf, Slick and Sliders. Now in it’s tenth year, the event organizers have listed to the people, both the riders and spectators, and decided to ditch the surf, and ditch the slicks. Tripling the prize money for the slider riders, which was the only discipline that ever got media coverage anyway.

“The first Venyu Triple-S Invitational in 2006 was about like-minded riders getting together to push the sport of kiteboarding in a new direction.” Says the guy behind Real Watersports, and the Triple S – Trip Forman. “The 2015 Venyu Triple-S celebrates 10 years of progression and innovation, with an all new, all in sliders format. More time in the REAL Slider Park, more progression, more time to enjoy the Triple-S energy and stoke. And yes, it’s stilled called the Triple-S, because this year, the all-in sliders format means triple the prize money for the winners. All-in sliders…All-in prize purse. The World is Not Ready….”

So will this mean anything for you the viewer, who’s looking forward to this years event? No, not really, because worldwide media coverage of the event (including us here at Seabreeze) have always focused on the sliders. The sliders at the Triple S are the only real unique aspect of the competition. Kiteboarding has the VKWC for freestyle and wave kiting, but nobody puts the money into building obstacles quite like REAL Watersports. Just one look at the event screams unique, and that’s why we love it.

As usual, the event is mainly invite only, so expect to see your favourites in attendance with a list of 40 named kiters released this week. Hopeful additions to the group have been saving their best video footage for an entire year, to cut into a Wildcard video submission. The best entries will be voted on during May, but only two will be selected to join the worlds best in slider-style kiteboarding on May 30th 2015.

Keep your eyes peeled for these videos to come in the next month, but in the meantime, check out one of last years best from Chris Bobryk. 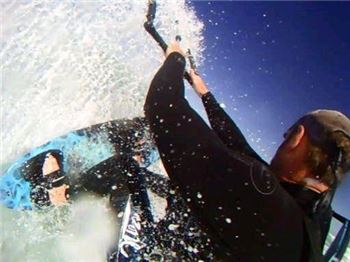